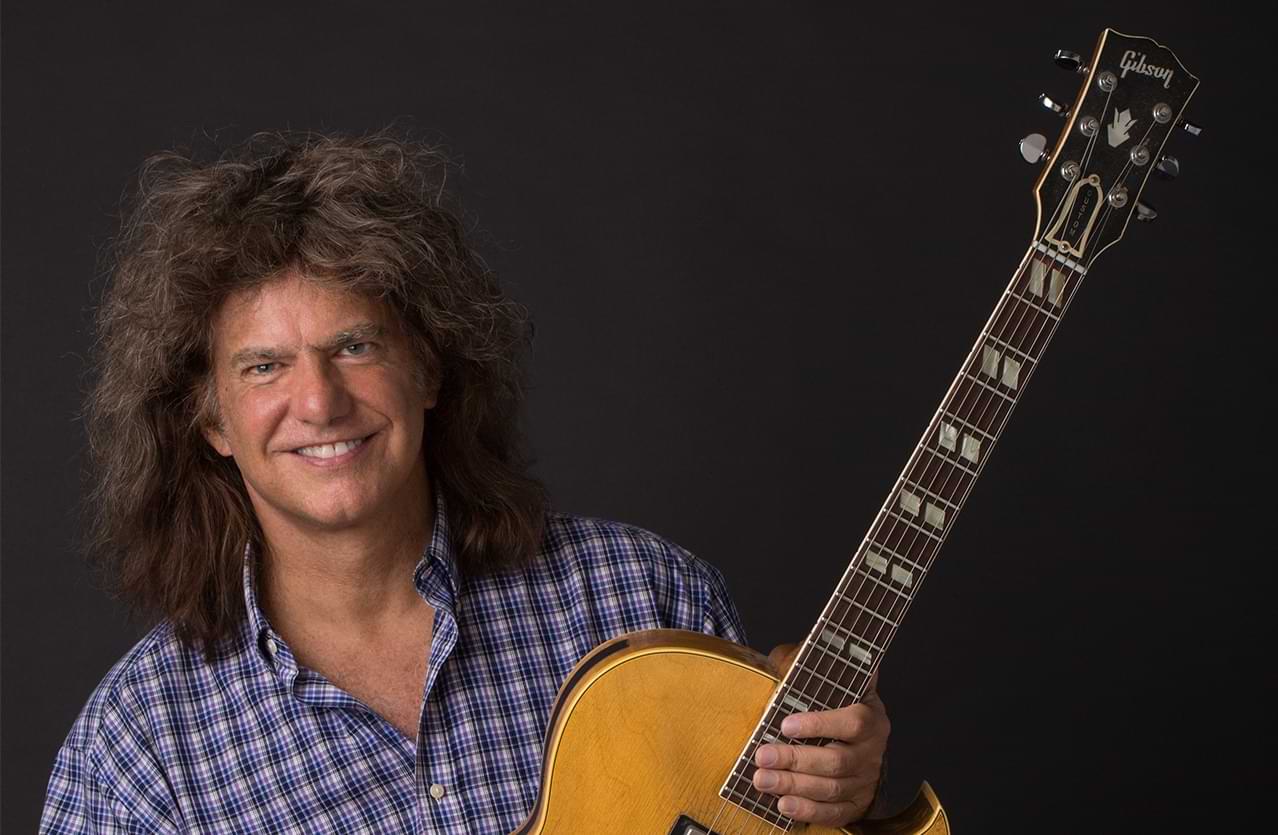 In accordance with State College Borough mandates and CDC guidance, all patrons, regardless of vaccination status, are to wear masks while in The State Theatre, except when eating or drinking. Masks are available upon patron request. We strongly encourage all attendees to be vaccinated.

If you, or members of your party, are unable to comply with Covid-19 requirements for a presentation, please contact us at boxoffice@thestatetheatre.org as soon as possible to inquire about a refund. Refund requests must be received no later than 24 hours before event start time. You can check out all our reopening policies here.

PAT METHENY was born in Lee’s Summit, MO on August 12, 1954 into a musical family. Starting on trumpet at the age of 8, Metheny switched to guitar at age 12. By the age of 15, he was working regularly with the best jazz musicians in Kansas City, receiving valuable on-the bandstand experience at an unusually young age. Metheny first burst onto the international jazz scene in 1974. Over the course of his three-year stint with vibraphone great Gary Burton, the young Missouri native already displayed his soon-to-become trademarked playing style, which blended the loose and flexible articulation customarily reserved for horn players with an advanced rhythmic and harmonic sensibility -a way of playing and improvising that was modern in conception but grounded deeply in the jazz tradition of melody, swing, and the blues.

With the release of his first album, Bright Size Life (1975), he reinvented the traditional “jazz guitar” sound for a new generation of players. Throughout his career, Pat Metheny has continued to redefine the genre by utilizing new technology and constantly working to evolve the improvisational and sonic potential of his instrument. Metheny’s versatility is nearly without peer on any instrument. Over the years, he has performed with artists as diverse as Steve Reich to Ornette Coleman to Herbie Hancock to Jim Hall to Milton Nascimento to David Bowie.

Metheny’s body of work includes compositions for solo guitar, small ensembles, electric and acoustic instruments, large orchestras, and ballet pieces and even the robotic instruments of his Orchestrion project, while always sidestepping the limits of any one genre. As well as being an accomplished musician, Metheny has also participated in the academic arena as a music educator. At 18, he was the youngest teacher ever at the University of Miami. At 19, he became the youngest teacher ever at the Berklee College of Music, where he also received an honorary doctorate more than twenty years later (1996).

He has also taught music workshops all over the world, from the Dutch Royal Conservatory to the Thelonius Monk Institute of Jazz to clinics in Asia and South America. He has also been a true musical pioneer in the realm of electronic music, and was one of the very first jazz musicians to treat the synthesizer as a serious musical instrument. Years before the invention of MIDI technology, Metheny was using the Synclavier as a composing tool. He also has been instrumental in the development of several new kinds of guitars such as the soprano acoustic guitar, the 42-string Pikasso guitar, Ibanez’s PM series jazz guitars, and a variety of other custom instruments.

It is one thing to attain popularity as a musician, but it is another to receive the kind of acclaim Metheny has garnered from critics and peers. Over the years, Metheny has won countless polls as “Best Jazz Guitarist” and awards, including three gold records for (Still Life) Talking, Letter from Home, and Secret Story. He has also won 20 Grammy Awards spread out over a variety of different categories including Best Rock Instrumental, Best Contemporary Jazz Recording, Best Jazz Instrumental Solo, Best Instrumental Composition at one point winning seven consecutive Grammies for seven consecutive albums.

In 2015 he was inducted into the Downbeat Hall of Fame, becoming only the fourth guitarist to be included (along with Django Reinhardt, Charlie Chrisitan and Wes Montgomery) and it’s youngest member. Metheny has spent much of his life on tour, often doing more than 100 shows a year since becoming a bandleader in the 70’s.

At the time of this writing, he continues to be one of the brightest stars of the jazz community, dedicating time to both his own projects and those of emerging artists and established veterans alike, helping them to reach their audience as well as realizing their own artistic visions.

Plenty of young musicians show promise, but very few enjoy the sort of meteoric rise that pianist, keyboardist and composer James Francies is currently experiencing. At only 24, he’s played with jazz headliners like Pat Metheny, Chris Potter, Jeff “Tain” Watts, Stefon Harris, Eric Harland, and Terrace Martin, and racked up equally impressive credits in hip-hop and R&B: from shows with Ms. Lauryn Hill, José James, Common, and NAS, to studio time for Chance the Rapper’s Grammy-winning hit “No Problem”, Mark Ronson , Childish Gambino, YEBBA, and Kodak Black, to appearances with The Roots on The Tonight Show Starring Jimmy Fallon alongside his mentor and friend Questlove.

Now comes Flight, the extraordinary debut album that welcomes Francies into the storied Blue Note Records family and finds him melding his jazz mastery and pop experience on 11 searching, engaging tracks. But as bold and new as this moment might seem for Francies, it’s also a homecoming, in more ways than one. Francies, like his Blue Note predecessors Robert Glasper, Jason Moran, Chris Dave and Kendrick Scott, is a proud Houstonite and a graduate of that city’s High School for the Performing and Visual Arts (HSPVA), one of the nation’s most reliable incubators for era-defining jazz talent. “Just to follow in their footsteps, let alone in the footsteps of Herbie Hancock, Bud Powell and all of these other artists who recorded for the label, it’s an honor,” Francies says. “And there’s a responsibility that comes with it too.”

Called “a pianist with liquid dynamism in his touch” by the New York Times, Francies started on piano around age 4, with classical training and an education in the music of the church. Blessed with perfect pitch and synesthesia (or the ability to hear in colors), he attended his first jazz concert, by Houston-born piano legend Joe Sample, at age 6, and began studying jazz in junior high. Many deep influences followed, some of them surprising. Along with pianists like Gonzalo Rubalcaba, Mulgrew Miller, Oscar Peterson, Art Tatum and Taylor Eigsti, a longtime friend, Francies points to guitarists Allan Holdsworth and Mike Moreno and such trumpet masters as Nicholas Payton, Freddie Hubbard, Clifford Brown and Lee Morgan. A highly decorated tenure at HSPVA— including spots in the Monterey Jazz Festival’s Next Generation Jazz Orchestra, the Thelonious Monk Institute All-Star Jazz Sextet and the GRAMMY Jazz Session Combo —earned Francies a full scholarship to Manhattan’s New School for Jazz and Contemporary Music.

While he was earning his degree, Francies was also rapidly ascending the jazz ranks and building a professional career. Early bandstand time with Jeff “Tain” Watts helped him cut his teeth and raise his profile, as did his first international tour, with Chris Dave and the Drumhedz. Chris Potter tapped him for his trio along with drummer Eric Harland, and Pat Metheny assembled a trio with Francies and drummer Joe Dyson Francies’ own group, Kinetic, has garnered buzz at events like Newport Jazz Festival, Monterey Jazz Festival, NYC Winterfest, and BRIC JazzFest. He met Questlove and Roots keyboardist James Poyser a few years ago, and since then has become a go-to resource for Quest and company—subbing for Poyser on Roots concerts and The Tonight Show Starring Jimmy Fallon; participating in the Roots-produced Hamilton cast recording, in addition to other film and TV score work organized by Quest; and, currently, collaborating with The Roots emcee Black Thought on a Broadway show.

Francies says that his experiences outside of jazz have helped him with concepts like “assembling sounds, consistency, delivery and the ability to support,” and it certainly isn’t difficult to hear these lessons throughout Flight. An embodiment of the Blue Note ethos at this thriving moment in the label’s history, it’s a dynamic, ultramodern jazz record, infused with pop, hip-hop and R&B, that remains entertaining from start to finish.

James Francies is a Blue Note Recording Artist, endorsed by Yamaha Pianos, Korg Keyboards, and is an IWC Brand Ambassador.

New Orleans native Joe Dyson has certainly been one to watch. He started playing music in his family’s church at just two years old. After being noticed for his peculiar talent, Joe was placed in the Louis “Satchmo” Armstrong Summer Jazz Camp where he was shadowed by the late, great clarinetist Alvin Batiste, and his longtime bandleader and mentor, alto saxophonist Donald Harrison. He went on to graduate from the New Orleans Center for Creative Arts (NOCCA), and earned a Presidential Scholarship to his alma mater Berklee College of Music.

As a musician, Joe has traveled across the globe extensively. Having touched almost every continent, he has performed throughout North America, South America, Europe, Asia, and Africa. He has appeared on over 30 albums, including recent releases by Dr. Lonnie Smith ALL IN MY MIND, (Blue Note Universal Records), Sullivan Fortner’s ARIA (Impulse Universal Records) and Christian aTunde Adjuah’s Grammy Nominated EMANCIPATION PROCRASTINATION (Ropeadope Records).

In addition to touring and recording, Joe has made appearances on the HBO hit series TREME, and can be seen performing in the documentary titled Been In The Storm Too Long, hosted by Tavis Smiley. He can also be heard on the movie soundtrack Rachel Getting Married, by the late, Oscar-winning director Jonathan Demme.

In 2015, Joe became an adjunct professor at Tulane University. For the past four years, Joe still finds the time to give back to his community through a benefit concert he created entitled “Christmas in Treme.” The proceeds help fund Holy Faith Temple B.C.’s outreach programs, including Food and Pantry, Computer Literacy and Vacation Bible School.

After releasing music with longtime friends The Bridge Trio, Joe is currently working on his debut album.